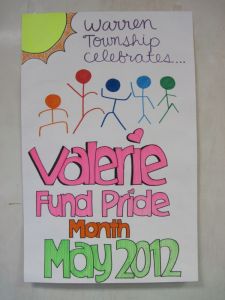 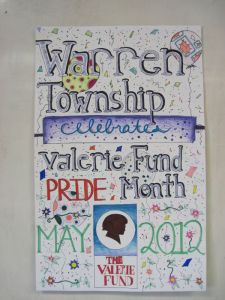 When Warren Township Mayor Carolann Garafola announced the month of May will be "Valerie Fund Pride Month," a town-wide initiative to raise money for The Valerie Fund Children's Centers kicked off and a poster contest was held at the Warren Middle School.  In an effort to involve the participation of Warren schools, the middle school offered this contest to its 700+ student population.  The purpose of the poster contest was to help raise the awareness of the Valerie Fund Pride Month. The poster design was up to the student artist, but it had to say, "Warren Township Celebrates Valerie Fund Pride Month, May 2012!"  Many posters were submitted, but from the entries, two were selected to be mass produced and displayed in businesses throughout town.  Eighth graders, Anjali Patel and Emily Tang, were named the Warren Middle School poster winners.  The girls both designed two very different posters.  Emily's poster showed many artistic details including the Valerie Fund logo, while Anjali's depicted a bright and simple style which included the Valerie Fund Camp Happy Times logo.  Samples of the posters can be seen at the Kings shopping center, in each Warren school building, and in various businesses throughout the town.  These posters are also displayed in the lobby of the Warren Middle School to help promote their school wide walk-a-thon scheduled for May 11th. This will be the middle school's fifth annual charitable walk-a-thon as part of the Warren Gives Back Program, which raised $50,000 to various charities over the past four years.  The funds raised by Warren Middle School and the four elementary schools on May 11th will be combined with the funds donated by the citizens and businesses of Warren and will be dedicated to funding the services at the Valerie Fund Morristown and Overlook Centers.