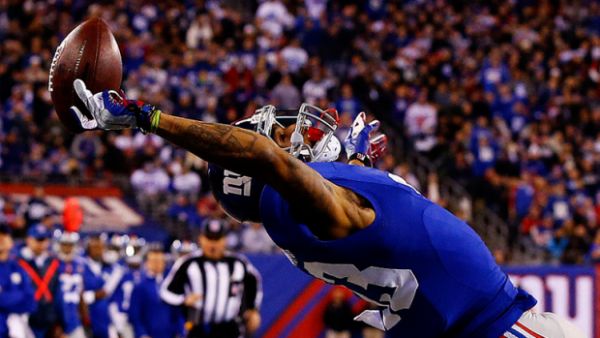 The NFL-watching world saw what many called the greatest catch they had ever seen when Giants rookie wide receiver Odell Beckham Jr. jumped into the air and cradled the football with one hand, capturing the imagination of millions by the time he came tumbling to the turf for a remarkable touchdown. All James "Zippy" Cimino saw was the lime green bracelets on Beckham's right wrist " his bracelets with the messages "Zippy Strong" and "#AllIn" written in purple " the ones he gave to Beckham when two strangers met two weeks ago in a Morristown hospital room. Lime-green bracelets on Giants receiver David Beckham Jr.'s left wrist can be seen as he makes his one-handed touchdown catch Sunday against the Cowboys. The bracelets were given to him by our own Valerie Fund patient and fan James "Zippy" Cimino. "Odell makes one of the best catches in NFL history, and it just so happens that my two bracelets are on his right wrist, the hand he made it with, and not his left wrist, it's just  eally surreal," said Cimino, a 20-year-old Giants fan from Neshanic Station who is battling cancer for the second time in less than three years. "I told him it's his talent and my luck, and we both laughed," Cimino said. "Such an incredible catch and because of him, in one of the most memorable photos of all time, it's a moment that we'll always share together." But the bond between Cimino and Beckham, the Giants' first-round draft pick in May, goes deeper. The next day, Cimino will resume chemotherapy as he continues his quest to overcome a disease he refuses to let defeat him. "I've taken time the last few weeks to think about all the people, including myself, who complain about the little things without giving much thought to what we all take for granted," Beckham said. "You meet Zippy, such a great kid, so adamant about beating cancer and believing he will, not once but twice. He's fighting for his life and never takes a day for granted. "That should be motivation enough for everyone to give everything we have to what we want in life, not just football, and to always be thankful for what we have," he said. Two weeks into an unexpected friendship, Beckham and Cimino are certainly grateful to have met each other.