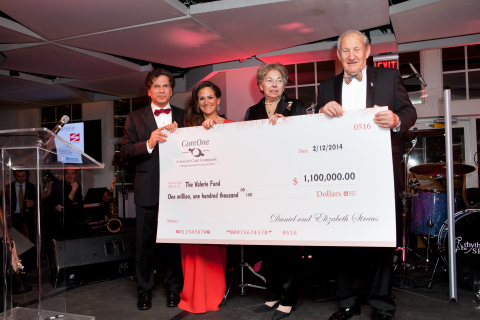 "The CareOne community is rooted in serving the communities that we operate in and we can think of no better organization to put our name and resources behind. My hat is off to Ed and Sue Goldstein for the  vitally important organization that they have built."

Addressing the crowd, Straus said, "The results of tonight's fundraiser are a testament to the caring spirit of the CareOne team. I am proud of       the time and energy our team has put into this noble cause as well as my daughter Elizabeth for her terrific leadership in rallying everyone  behind The Valerie Fund and tonight's event."

He added, "The CareOne community is rooted in serving the communities that we operate in and we can think of no better organization to put our name and resources behind. My hat is off to Ed and Sue Goldstein for the vitally important organization that they have built."

Elizabeth Straus, daughter of Daniel E. Straus, was the chief organizer  of the event and had high praise for the strong support of the event by the CareOne team: "I can't say enough about how proud I am of my team at CareOne for what they accomplished tonight! When we set the goal of raising $1 million for The Valerie Fund in a little over a month, some   said it couldn't be done. But, as always, the CareOne team did not disappoint."

She lauded the work of Valerie Fund co-founders Ed and Sue Goldstein, saying that their "work and passion for the organization they started has served as a great inspiration to me and my team over the past months." From visits to Valerie Fund Centers, she said, "I can see why they have become the well-respected organization that they are today. Everyone from the nurses, doctors, administrators and technicians exhibit such pride and caring that it comes through just walking through  the halls. As a parent, knowing that there is a Valerie Fund that exists in our communities should give us all a great sense of comfort."

In their remarks, Valerie Fund co-founders Ed and Sue Goldstein  recounted how The Valerie Fund was founded, in memory of their daughter, Valerie, who lost her battle with cancer in 1976. They could only obtain advanced treatment for Valerie outside of New Jersey, with long drives and complicated logistics. The experience caused them to found the fund, which now supports seven Valerie Fund Centers, six in New Jersey and one  in New York City. Now, said Ed Goldstein, "A child suffering from this  terrible disease no longer has to be a step-child to New York and  Philadelphia. He and she now have their own home," The Valerie Fund Centers.

He emphasized that the support provided by the Centers goes well beyond  medical care, and includes "educators, psychologists, child life       specialists, social workers and staff members who are not covered by  [the patient's] insurance but are vitally needed." Said Sue Goldstein,  ". . . thank you, CareOne, for being so wonderful to us. We at The Valerie Fund are very grateful."

In introducing her father, Elizabeth Straus said of him: "He instilled  in me and my siblings from a very early age the importance and necessity of giving back to those who are less fortunate. It is through hisincredible sense of responsibility in raising money, and giving of your  time and volunteerism to countless charitable organizations, thatinspires me to pay this forward with my CareOne team members this evening."

Numerous vendors and suppliers of CareOne and associated companies  participated in the event. Additionally, more than 20 healthcare and  hospital executives from across New Jersey attended, including representatives from the seven top hospitals at which Valerie Fund Centers are located.

Along with celebrity appearances, the festive evening of dinner and  dancing also featured both live and silent auctions.

In addition to supporting treatment at the Valerie Fund Centers, some of  the funds raised will go to providing scholarships, transportation totreatments for patients who otherwise would have to depend on public  transportation, and Camp Happy Times – an annual free one-week overnight  camp experience for 200 children who have or have had cancer.

In late December 2013, the CareOne community joined together to provide  more than 3,000 toys to Valerie Fund patients just before Christmas. The CareOne community has now raised more than $2 million in charitable donations in less than two years. More than $1 million was raised at a  December 2012 CareOne Disaster Fund event to aid more than 100 CareOne employees who suffered significant losses during Hurricane Sandy.

Donations to The Valerie Fund are still being accepted at http://www.thevaleriefund.org/valentineBall/

About CareOne: For more information, go to: http://care-one.com

About The Valerie Fund: For more information, go to: http://www.thevaleriefund.org