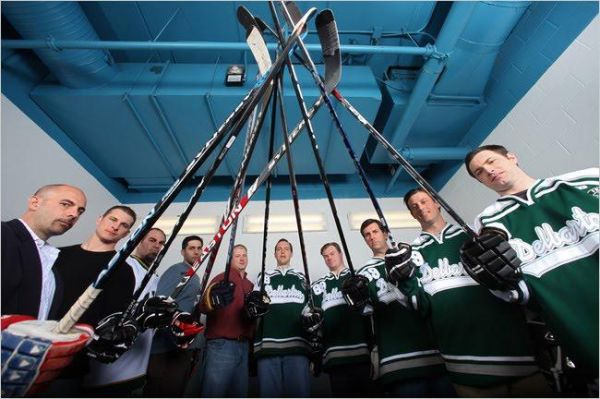 I absolutely love this story, as it gets to the core of what This Old Jock is all about. I wrote two quick hits, one for the
New York Times (which ran with the accompanying photo), and one for New York Magazine's web site. Here's the unabridged version, which I think captures more of the soul of the event.

Talk about delayed gratification. When Delbarton's Mike Pendy and 's Kenny Blum skate into the face-off circle for the opening drop of the puck on Saturday, April 3, at Mennen Arena in , it will be the culmination of a long, long wait. Twenty-one years, to be exact. More than a lifetime, considering that Pendy, Blum and their teammates, now all in their late 30s, were fuzzy-faced teenagers in 1989 when the two teams were first set to meet for the high school hockey championships.

That game, however, never happened. In one of the most peculiar episodes in high school sports, the 1989 championship game, scheduled for March 18, was canceled due to a measles outbreak the affected both students and teachers at Delbarton, an all-boys commuting prep school in Morristown.

"It was the most bizarre thing," said James Olsen, a senior Delbarton defenseman in 1989 who now works for Bank of America Merrill Lynch. "The school brought us into the auditorium to announce [the cancellation]. I honestly thought it was going to be a last-minute pep rally. It took a little time to register."

Until that decision, it looked like a dream final between the state's two top teams – St. Joseph's of Montvale sported a 24-2-1 mark, while Delbarton was seeded No. 2 with a 24-3-2 record – that had rosters littered with all-state selections. Two players, Kenny Blum of St. Joe's and Derek Maguire of Delbarton, would be selected in the 9th round of the National Hockey League draft later that spring. Then, in an instant, the game was scrapped.

The Delbarton coach, Jim Brady, vividly remembers that Friday, having practiced in the morning before attending business meetings in . Afterward, he drove to meet his team for a pre-game dinner. In the parking lot, he bumped into Olsen, who relayed that the game was canceled. "I thought he was kidding me," said Brady. "I walked into the restaurant, and there were all the kids, and it was like a morgue."

The finality of the state's decision, say the players, didn't hit home until the following week. A few days later, the New Jersey State Interscholastic Athletic Association's executive committee declared the two teams co-champions, and what might have been the greatest hockey final in history was relegated to some dust-covered record book. It remains the only time co-champions have been declared in hockey.

"That was a pretty low moment for everybody," said Olsen. "We weren't going to have another shot it. Not everyone was going to play at college; some weren't going to be continuing their hockey at any competitive level. It was a lost opportunity."

On April 3, though, these players from 1989 will have the rare opportunity of a second chance. The thought of actually playing the game – dubbed the Frozen Flashback – started as a lark last spring. Talk began percolating after an off-hand comment by Pendy, a center on the '89 Delbarton squad, in a Star-Ledger article on the 20th anniversary of the non-game. "Maybe we could get all these guys together 20 years later, lace up the skates somewhere and play that game," the former Green Wave assistant captain told the Star-Ledger. While Pendy's quote prompted a few giggles, no one took it seriously, given the logistics of trying to bring 46 players together two decades after the fact. No one, that is, except Scott Williams.

Williams, a defenseman on the '89 St. Joe's team, saw parallels between the lost final and The Best of Times, a 1986 comedy starring Robin Williams as an aging banker who couldn't forgive himself for dropping the touchdown pass (thrown perfectly by Kurt Russell) that cost his teammates, and town, bragging rights against their arch rival. Soon, Williams hatched a plan to combine that storyline with the quintessential hockey movie – Paul Newman's Slap Shot – and the blueprint for the Frozen Flashback took shape. Buoyed by the support he got from an ESPN.com column by John Buccigross, Williams reached out to Delbarton.

He was steered toward Olsen ("James is always one to think big," said teammate Peter Ramsey), who was initially skeptical. But Williams struck a nerve when he unveiled his idea of the game being a charity for cancer research. Williams's mother Janice has brain cancer, and he thought the game could be a terrific fund-raising vehicle. Olsen, who recently lost his father to cancer, was taken with Williams's sincerity, and agreed to pitch in.

"That was really critical to making this event meaningful," said Olsen. "We're going to do some real tangible good for people who are suffering. Everybody I know has been touched in one way or another by cancer. It's devastating. I like the fact that people are going to use this opportunity to support a good cause."

The players also responded, with a reported 40 of the original 46 signing on. "It's timeless," said Maguire, an all-star defenseman who later played at Harvard and two years with the Montreal Canadiens’ top farm team. "Whether you're 17 or 40, you want to play the game."

"If anybody felt bad about what happened 21 years ago, they can feel good about it now," echoed Blum, who had an 11-year professional career after being drafted by the Minnesota North Stars. "We're not raising millions and millions of dollars, but we're doing something to contribute to a cause that needs as much help as possible."

To make up for roster shortfalls, each team can add five players (they must be alumni and have graduated prior to 1989). The prevailing enthusiasm, say former teammates, is a testament to the strong bond that hockey engenders. "What's been great is getting the whole community back together," said Maguire. "It's been fun to see to see the guys coming out of the woodwork."

Employing myriad connections through hockey, work, and their respective schools, Frozen Flashback organizers secured a number of corporate sponsorships, most notably Gatorade. According to Ramsey, a former Delbarton left wing and current managing director at Barclays Capital, the organizing group is close to covering its costs, and expects to top its fund-raising goal of $100,000 for cancer research. A prime beneficiary will be the NHL's Hockey Fights Cancer program, as well as Jam for Janice, the Valerie Fund, and the respective schools. At the insistence of New Jersey Devils co-owner and Delbarton grad Michael Gilfillan, there was some thought given to the hosting the game, but that plan proved unwieldy. Instead, Gilfillan used his NHL contacts to acquire a number of items for the game's online auction including signed jerseys from superstars Wayne Gretzky, Alex Ovechkin, Sidney Crosby, and Mario Lemieux—a cancer survivor himself. The MSG Network is on board to broadcast the game, which will be held at the 2,800-seat Mennen Arena, the original site of the championship match.

"The great thing about playing at Mennen, is that the place was packed for our games," said Olsen of Delbarton's home rink. "It was a great experience being on the ice in front of those crowds, and now we have one more opportunity to do it."

Of course, the prospect of a full house has players thinking they've got to put on a good show. Many skate regularly. Others are returning to the rink with a vengeance, touting new gear and a determination to recapture the fitness of their youth. All expect a good, clean game. "Some people are trying to portray this as a grudge match, and nothing could be further from the truth," said Ramsey. Pendy agreed. "There's bound to be some apprehension, but once the puck drops, I think everyone's going to have a good time with it and make it a class event."

The modified rules will mirror an adult recreation league: Full checking is prohibited, though contact is allowed. John Lively, a forward on St. Joe's '89 team and now a lieutenant for the , fire department, confirmed that Juan DeCarlo, one of the original referees scheduled for the 1989 game, will officiate the April 3 match.

"Hockey players are, by nature, competitive, and once the adrenaline gets pumping, that competitiveness is going to kick in," said Williams. "When we get on the ice, it's going to be us against the them."

Both sides have also decided that the game can't end in a tie; there will be a winner on April 3, even if it means sudden-death overtime. "I don't think anybody would want that," said Blum, chuckling. "Other than the charity part, that would be defeating the purpose."

There are no plans, however, to petition the NJSIAA to name the Frozen Flashback winner as the 1989 champion. "We kidded around about that, but I don't think it would be fair in terms of history," said Williams, laughing. "First, I don't think the state would go for it. And, at the end of the day, you can't have a title based on what happens 21 years later. Plus, the event has taken on such a larger cause."

For details on the April 3 game, and the online auction, visit FrozenFlashback.com.


The Valerie Fund will be receiving a portion of the proceeds from the game.