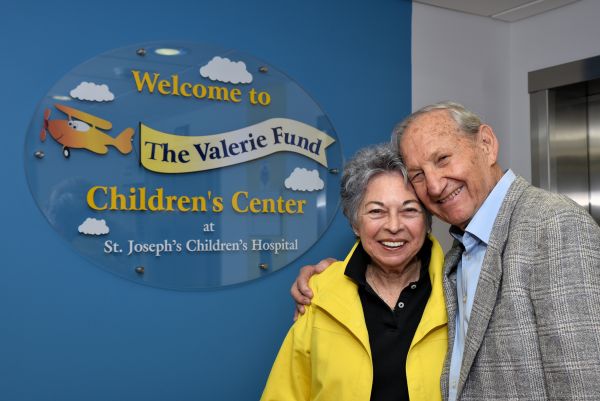 [Maplewood, NJ, May 1, 2017) The Valerie Fund is proud to announce that Sue and Ed Goldstein will be inducted into the New Jersey Hall of Fame. The determined efforts of the Goldsteins over the last four decades have resulted in access to compassionate care for thousands of children in New Jersey battling cancer and blood disorders. The induction ceremony will be held on Sunday, May 7th in Asbury Park.

Public recognition as Unsung Heroes closely follows the 40th Anniversary of the founding of The Valerie Fund, one of the largest networks of hospital-based outpatient facilities for children with cancer and blood disorders in the nation. Six of the seven Centers are located in New Jersey. Upon hearing of their selection, Sue and Ed Goldstein said, "We are deeply honored by our induction into the New Jersey Hall of Fame. This award represents all that The Valerie Fund has accomplished in helping children and their families in their battle to defeat pediatric cancer and blood disorders within our Valerie Fund Children's Centers."

The Goldsteins will be inducted by previous unsung heroes Eric LeGrand and Lt. Brian Brennan.

Dominic DiBari, Chairman of The Valerie Fund Board and parent of a Valerie Fund patient said, "All of us who are privileged to work with Ed and Sue are continually awed and inspired by their tireless efforts to improve the lives of others. The Valerie Fund is a shining example of the power people have to bring about positive change in the face of extraordinary circumstances. We join the New Jersey Hall of Fame in honoring the Goldsteins for their remarkable contributions, and for being there for so many children and families who truly need a hero."

"The New Jersey Hall of Fame is very pleased to be inducting Sue and Ed Goldstein. They join a distinguished list of Unsung Heroes who demonstrate the best of the human spirit, and who make the Garden State proud. We extend our warmest congratulations to them both on this honor they so richly deserve." Said Steve Edwards, President of the New Jersey Hall of Fame Foundation.

Sue and Ed Goldstein, longtime New Jersey residents, have suffered an unthinkable tragedy not once, but twice, losing both their daughters to cancer at different stages of their lives. In the face of their grief, the Goldsteins used their losses to help others, creating programs in the wake of each daughter's passing. Their extraordinary efforts over more than 40 years resulted in the founding of two organizations that have provided hope and life-saving treatment to thousands: The Valerie Fund and The Stacy Goldstein Breast Cancer Center at Rutgers Cancer Institute of New Jersey.

Sue and Ed have always made their mission about the children they serve, while they've largely worked in the background. But through the inspirational organization they named for their younger daughter, Valerie, the Goldsteins' impact on many lives in New Jersey has been lasting and profound

ABOUT THE VALERIE FUND: After their nine-year-old daughter Valerie died of cancer in 1976, Sue and Ed Goldstein were determined that no family should have to travel great distances to receive superior medical care. Along with a group of close friends, they began fundraising efforts from their living room---tireless work that would lead to the 1977 opening of New Jersey's first pediatric oncology facility at Summit's Overlook Hospital.
Forty years later, The Valerie Fund's mission remains that of supporting comprehensive health care for children battling cancer and blood disorders. The Valerie Fund has earned the top 4-star rating from Charity Navigator.