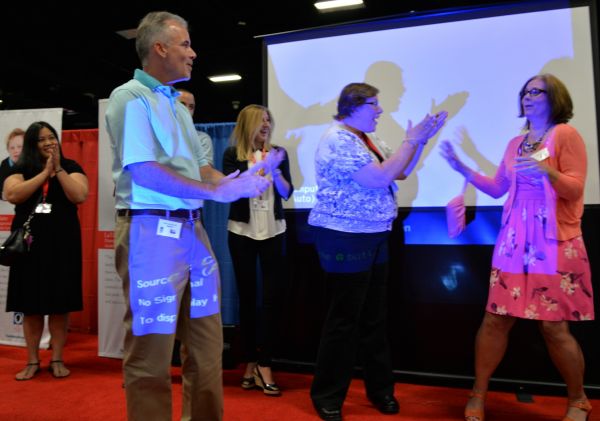 MAPLEWOOD, NJ - September 15, 2014 - The Dancing with the Cars Gala supported by NJ Auto Retailers Unite to benefit the Valerie Fund, on Sunday, September 14, was filled with festivities and anticipation for selection of the winners of two (2) new cars.

The Valerie Fund, New Jersey Franchised Automotive Retailers and 83 sweepstakes finalists attended the Gala. More than 40 vehicles (representing more than 25 brands) were on display for the finalists and other attendees to view, while also enjoying entertainment and food.

At 6:00, all 100 finalists gathered and names were chosen until only 10 names remain.  Those individuals were brought to the stage and interviewed about which car they will choose, if they are one of the final two winners.

As the evening came to a close, a Valerie Fund child pulled two names and those two individuals chose the vehicle they want as a prize from among the dozens on display (the contest covers a retail value of $33,000).  The other 98 finalists also receive consolation prizes.

The Two Grand Prize Winners were:

Nearly 180 dealerships participated in the New Jersey Auto Retailers Unite campaign and will ultimately raise more than $600,000 for New Jersey children with cancer and blood disorders served by The Valerie Fund.

The Valerie Fund honors Valerie Goldstein, who lost a brave fight against cancer in 1976 at the age of nine. During six years of treatment, Valerie and her parents, Ed and Sue Goldstein, traveled hundreds of miles weekly because New Jersey then lacked comprehensive in-state care facilities for children with cancer and blood disorders. In Valerie's memory, her parents founded the Valerie Fund to ease the burden of care on other families. Since then, the Valerie Fund has supported the founding of seven centers in New York, New Jersey and Pennsylvania hospitals for children suffering from cancer and blood disorders, providing state-of-the-art outpatient care to more than 4,000 children and their families annually.