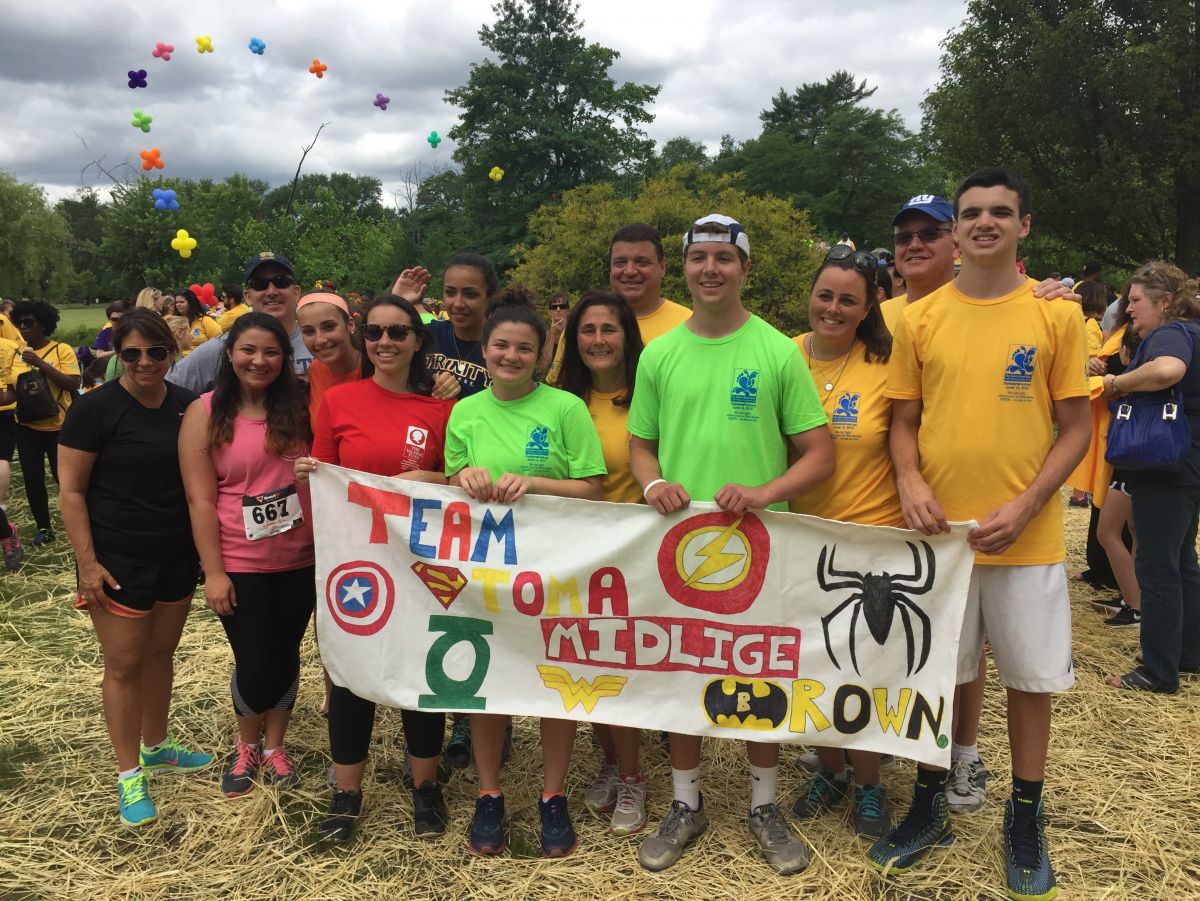 In 2003, at four years old, Sara Stoma presented with an onset of various symptoms, including strep throat, fevers and pain. After two weeks, she had blood work done and was diagnosed with ALL. She was promptly referred to The Valerie Fund Center at Saint Barnabas. Over the next two and a half years, Sara would go through treatment. Meredith, Sara's mother, said "Just being able to sleep in your own bed, keeping life as normal as possible, was such a comfort. It felt good knowing that you were a short drive away from the care team your child needed."

This is when Team Stoma began. The year Sara was diagnosed, the Stomas created their team to support and celebrate Sara. They invited family, friends and neighbors to join their team, including Sara's parents Meredith and Peter's law school friends Suzanne and Michael Midlige with their children Cara, Abbie and Jessie, and Tara Brown, Peter Stoma's high school friend, her husband and her sons Steven and Michael.

Ten years later, Cara Midlige, daughter of Suzanne and Michael, would begin experiencing concerning symptoms. She felt like she couldn't breathe and was having heart palpitations. After a barbeque family night at the Stomas, she went to her regular pediatrician, who then sent her over to the hospital to get some testing done. To the shock of everyone, Cara was diagnosed with ALL and began treatment soon thereafter. She was treated at The Valerie Fund in Morristown. Upon her first arrival there, at the front desk, was a poster of Sara from the Walk. The Stoma family would come visit Cara in the hospital and her home over the next two and half years of treatment. Suzanne Midlige remembers thinking "how lucky we are that we live just fifteen minutes from Morristown and The Valerie Fund. The fact that Cara was treated so close to home helped the entire family keep things as normal as possible."

Cara began interning for The Valerie Fund while she was being treated at the Center, and would continue working for The Valerie Fund part-time for the next eight years. "Before The Valerie Fund, I always knew how important my family was, but I never could have imagined that my experience at The Valerie Fund Center in Morristown would change who I am for the rest of my life. The doctors, nurses and center staff showed love, compassion and care that has shaped who I am as a person today and I know that there is no other place I could have been treated that would take care of me like family."

Six years later, in May 2014, as a senior, in the high school both Stoma girls attend, Steve was on track to play football at Lehigh University, his plans came to a halt. During practice for the Paul Robeson All-Star High School Football Classic, Steve felt overwhelming fatigue and found it hard to breath and run. The next day, after some blood work, he was sent to The Valerie Fund Center at Newark Beth Israel where he was diagnosed with ALL and started treatment immediately. Knowing more than they would like to have known from both the Stoma and Midlige family, the Brown family found hope in knowing where both Sara and Cara are at this time in their lives and what they had been through. About a month into treatment, Steve switched to The Valerie Fund Center at Morristown to be closer to home. During a bone marrow aspiration, he would discover that he had a rare subtype of ALL, hypodiploid, that has a particularly poor prognosis. His only chance at remission was to get a bone marrow transplant. Luckily his brother Michael was a perfect match. After consulting with several hospitals for the bone marrow transplant, New York Presbyterian Columbia University Medical Center was chosen, and Steve would begin care with The Valerie Fund Center at Columbia after the transplant. "Steve received treatment at 3 different Valerie Fund Centers. I can honestly say that they were all impressive. The physicians, nurses and staff become family and their positivity and compassion is what gets you through some of the worst days of your life", says Tara, Steve's mom. Steve's plans for college changed after transplant, he went on to attend and graduate from The University of Michigan. "While the world-class doctors and nurses at The Valerie Fund are able to save the life of kids with cancer and blood disorders, the incredible social workers and educational liaisons do the equally important work of saving the WAY of life of kids with cancer," says Steve.

Today we honor "Team Stoma, Midlige and Brown." Three families touched by cancer that came together in tough times to support each other and raised more than $250,000 over 16 years for families like them. When you see their team for our annual walk, you'll notice that they always end the team's name with a "." The "." represents that cancer ends here, with the hope that no other family is affected by cancer and has to go through everything they faced.